Global foreign direct investment falls 49% in first half of 2020

Global foreign direct investment falls 49% in first half of 2020

The biggest drops occurred in developed countries, cutting across all major forms of foreign direct investment.

Global foreign direct investment (FDI) flows fell 49% in the first half of 2020 compared to 2019, due to the economic fallout from COVID-19, reveals UNCTAD’s latest Global Investment Trends Monitor released on 27 October.

In the wake of the pandemic, lockdowns around the world slowed existing investment projects and the prospects of a deep recession led multinational enterprises to reassess new projects.

“The FDI decline is more drastic than we expected, particularly in developed economies. Developing economies weathered the storm relatively better for the first half of the year,” said James Zhan, UNCTAD’s investment and enterprise director. “The outlook remains highly uncertain.”

According to the report, developed economies saw the biggest fall, with FDI reaching an estimated $98 billion in the six-month period – a decline of 75% compared to 2019.

The trend was exacerbated by sharply negative inflows in European economies, mainly in the Netherlands and Switzerland. FDI flows to North America fell by 56% to $68 billion.

Meanwhile, the 16% decrease in FDI flows to developing economies was less than expected, due mainly to resilient investment in China. Flows decreased by just 12% in Asia but were 28% lower than in 2019 in Africa and 25% lower in Latin America and the Caribbean.

In the six months to June 2020, developing countries in Asia accounted for more than half of global FDI. Flows to economies in transition were down 81% due to a strong decline in the Russian Federation.

The decline cut across all major forms of FDI, the report shows.

The report shows that cross-border M&A values reached $319 billion in the first three quarters of 2020. The 21% decline in developed countries, which account for about 80% of global transactions, was checked by the continuation of M&A activity in digital industries.

The value of greenfield investment project announcements – an indicator of future FDI trends – was $358 billion in the first eight months of 2020. Developing economies saw a much bigger fall (-49%) than developed economies (-17%), reflecting their more limited capacity to roll out economic support packages.

The number of announced cross-border project finance deals declined by 25%, with the biggest drops in the third quarter of 2020, suggesting that the slide is still accelerating. 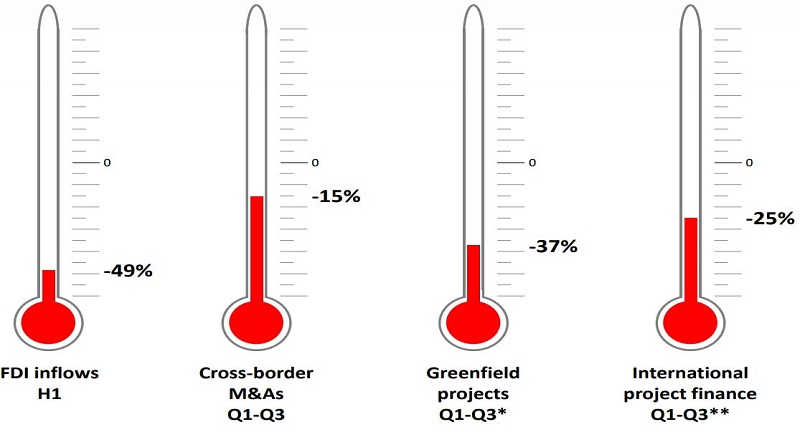 Source: UNCTAD
*The trend in greenfield projects refers to the first eight months of 2020.
**International project finance refers to (the trend in) the number of deals, as project values for the latest months are unavailable. 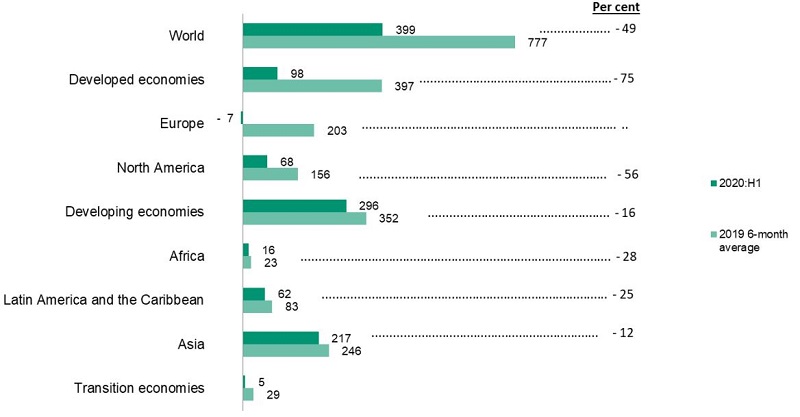 Prospects for the full year remain in line with UNCTAD’s earlier projections of a 30% to 40% decrease in FDI flows, the report indicates.

The rate of decline in developed economies is likely to flatten as some investment activity appeared to be picking up in the third quarter.

Flows to developing economies are expected to stabilize, with east Asia showing signs of an impending recovery.

The flows will hinge on the duration of the health crisis and the effectiveness of policy interventions to mitigate the economic effects of the pandemic. Geopolitical risks continue to add to the uncertainty.

Despite the 2020 drop, FDI remains the most important source of external finance for developing countries, according to UNCTAD. Global FDI stock stood at $37 trillion at the end of 2019.