Foreign direct investment (FDI) flows to developing economies have shown relative resilience to the COVID-19 crisis, falling by just 12% in 2020 compared with the staggering 69% collapse recorded by richer economies.

But the steep decline in greenfield announcements and international project finance in Africa, Asia and Latin America and the Caribbean is a cause for major concern.

UNCTAD defines productive capacities as the productive resources, entrepreneurial capabilities and production linkages that together determine the capacity of a country to produce goods and services and enable it to grow and develop.

“Without investment in the productive sectors of the economy, developing countries will struggle to rebuild from the effects of the pandemic,” Mr. Zhan said.

Globally, announced greenfield projects – when a company plans to invest in new production facilities in a foreign country – declined by 35% in 2020 to an estimated $547 billion.

According to the report, the decline was even steeper in developing economies, dropping 63% in Africa and 51% in Latin America and the Caribbean. Even developing economies in Asia – the group that has weathered the coronavirus-induced FDI storm the best – saw a 38% drop in greenfield announcements.

Announced greenfield investment, by sector and selected industries, 2020* (per cent change vs. 2019) 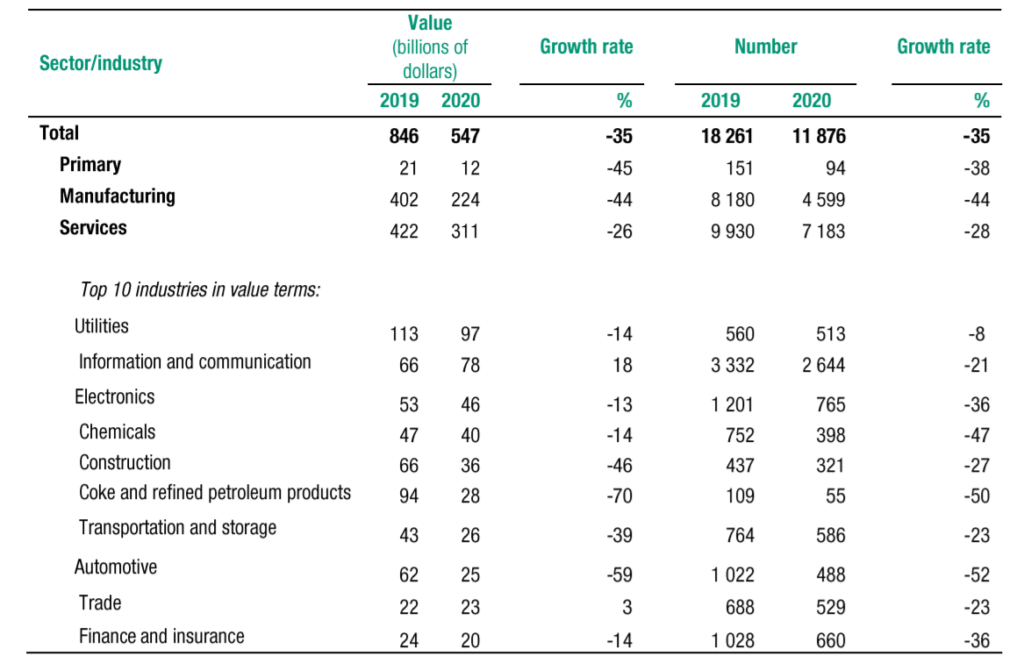 Source: UNCTAD, based on information from the Financial Times Ltd, fDi Markets (www.fDimarkets.com).
*Greenfield investment projects refer to the first eleven months of 2020.

Likewise, global cross-border project finance deals, an important source of investment in infrastructure like ports and dams, were weak up to the third quarter of 2020, before a flurry of new project announcements in the final months of the year helped dampen the overall decline to 2%.

But the report highlights that most of these projects were part of COVID-19 economic support packages in developed countries.

The far more limited capacity of poorer countries to roll out COVID-19 packages to stimulate investment in infrastructure means that the big drops in project finance deals were registered in developing economies.

In Africa, for example, such investment dropped by 40% in 2020. The continent is home to most of the world’s least developed countries.

The slide isn’t over

Even more worrying, the report says, is that the biggest drops in international project finance in developing economies occurred in the second half of the year, which is contrary to global trends.

“The data suggests that the slide in developing economies is not yet over,” Mr. Zhan says.

“It sends a worrying signal that project finance in 2021 will be skewed towards developed economies, and that any increase in FDI flows is more likely to come from cross-border mergers and acquisitions than from new investment in productive assets.”

According to the UNCTAD report, announced cross-border M&A deals dropped only by 10% in 2020, rebounding in the second half of the year thanks to technology and healthcare deals.